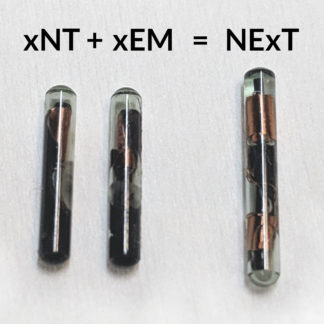 The NExT was designed by Dangerous Things to include the equivalent of an xNT (13.56MHz NTAG216 NFC) and xEM (125kHz T5577 RFID) chips in one chip implant!

The RFID side is a T5577 emulator chip that can behave like many different common low frequency chip types, including EM41xx, EM4200, HID 1326 ProxCard II, HID 1346 ProxCard III, and Indala access cards and keyfobs.

The insertion hole is normally fully closed 2-3 days later and the swelling will dissipate over 2 weeks.
The insertion scar is usually completely invisible by 2 months.